From Vodafone via Visual.ly, here’s an infographic that will make you think about whether the way your company does business needs to change to attract the newest crop of college grads. Much of this information comes as no surprise. For example, the Y generation expects your IT department to provide support and security for their smartphone, tablet or other mobile device as part of the BYOD trend. But the built and furnished environment is going to be just as important as the technology. If you scroll down to the bottom of the graphic, you’ll see that the Gen Y employees expect their office environment to provide different types of space for different types of work. We’re betting one of those spaces will be for highly concentrated work – and it will need some nice privacy panels. 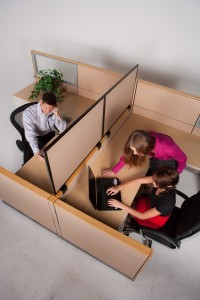 OK, we are back with part four in our series that was instigated by a review of the research paper “Defining the Code” by Steelcase. In this next piece, we’re going to look at an aspect of workplace culture that’s sure to stir up some debate: Masculine vs. Feminine.

These terms can mean a lot of different things. The way they are used in the paper linked above is as a generalization about how people work together in society. It doesn’t imply that “all men are like abc” or “all women are like xyz”. Instead, it’s just shorthand for talking about certain behaviors. A masculine work environment is one where competition is steep and performance is oriented toward achieving work goals at all costs (think Glengarry Glen Ross). In contrast, a feminine work environment is one where cooperation and collaboration are highly valued with an emphasis on relationships and good work/life balance.

Expect a Mix at Work

There can actually be more than one of these workplace cultures operating in the same company. For example, many sales departments are dominated by the masculine work mode while Human Resources has long been viewed as a “pink collar” department. Each type of work style has its pros and cons. We won’t try to say one is better or worse than the other since that’s definitely outside the scope of this blog post!

What we do want to consider is how each work style might be best supported with the use of panel extenders or privacy panels. Here are some initial thoughts (we’d love to hear your ideas in the comments):

Let There Be Peace at Work

Sometimes, a lack of cubicle walls can be more than just an inconvenience – it can be downright dangerous. Check out what happens in this YouTube video when one employee decides to pester another by throwing stuff across an open, bench style worktable. It’s all apparently in good fun until the harassed coworker launches himself across the desk space and beats the joker with his own keyboard. The saddest thing is that the surrounding coworkers forced to share the same workspace barely miss a beat.

Is this such a common occurrence at their workplace that it doesn’t merit notice? Is this the kind of jungle the office can devolve into without the civilizing influence of cubicle walls? You be the judge. We think employees should at least have a nice desk mounted divider if they’re forced to sit directly across from each other all day. It may not stop the spitball trebuchet, but at least it makes it more difficult to lunge over the desktop to commit bodily harm.

Turn Any Cubicle into a Private Office

We love it when other bloggers agree that higher walls on cubicles are the most luxurious option! Arnold’s Office furniture compares “The 3 Types of Cube Heights and What It Says About Your Company”. Apparently, 66” is the height at which you can consider your cube its own sovereign nation. Unless you work in an office with a bunch of NBA stars, your privacy is assured. “High-walled cubicles are the Rolls Royce of office privacy. Even standing, employees cannot peer into each other’s office space, which allows for quiet, focused work without outside distractions.”

We agree! Fortunately, we’ve figured out a way to increase the height of cubicle walls at a pre-owned Ford Taurus price instead of a Rolls Royce price. Check out our full line of panel products here. How many inches do your walls need to gain to hit 66?

Here we are at the third part of our series on workplace culture inspired by the Steelcase paper “Defining the Code”. We’re jumping ahead a little to talk about high context vs. low context cultures. An environment or culture where everyone kind of knows what’s expected of them based on subtle or even completely non-verbal social cues is considered high context. In other words, if you came into the situation without an understanding of the unspoken rules and social niceties, you would be like a bull in a china shop (this is why Americans seem to routinely embarrass themselves when they visit other countries). In contrast, in a low-context culture, everyone just comes out and says what they think. To someone from a high context culture, this can seem abrasive and tactless or just unnecessary.

Communication in workplaces in the United States tends to be explicit rather than implicit. For example: A worker goes to his manager and proposes an idea. The manager seems to mull it over for a moment and then replies, “That would be difficult.” In an individualist explicit communication culture, the worker hears, “Tell me how to make this easier and I’ll consider it.” In an implicit communication culture, the worker would hear, “That’s never going to happen, so you might as well drop it.”

In a culture where a direct approach is seen as desirable and efficient, it’s normal for a coworker to drop by an employee’s cubicle and ask, “Do you have a minute?” Even if the worker doesn’t actually have the time to stop what they are doing, their train of thought has already been interrupted. Regaining that lost focus can take several minutes (some research suggests it can take a full 20 minutes to get ‘back in the zone’ after an interruption). So, it’s obvious how having privacy panels might help reduce the incidence of unwanted social interaction. When a coworker has to actually get up from their desk to walk over and ask for help instead of just calling across the room, they may be less likely to interrupt.

In a high context culture, people tend to be much more aware of body language. So, an employee could simply assume a posture that tells coworkers, “I’m busy.” and expect to be left alone. Of course, the downside of this type of work environment is that high context communication requires a lot of scrutiny and awareness of everything going on around you. In these situations, a little added visual privacy could come as a welcome relief.

One of the things our customers particularly like about your desk-mounted privacy panels is that they installation isn’t a permanent commitment. We considered the various ways to attach a panel to the desktop and decided to go for the low impact approach. Unlike products that force you to put a hole in the desk and screw the panel in place, ours fit on your desk with a removable bracket. There’s no bolt going through your desk and no top plate screwed down into the surface. This means you can always decide to move the panel to a different position on the desk or switch it to a new desk at any time. We take it for granted that your workplace and office furniture won’t stay the same forever – but we do think that you shouldn’t have to put a hole in your desk to Support an improved work style!

Last week, we explored the “Power Distance Index” aspect of workplace culture (based on Steelcase’s “Defining the Code” paper). This week, we’ll consider the next factor:

Individualism is easily recognizable as the underlying psychology of US culture. Although Americans often do exactly the same things en masse (wearing the same fashions, watching the same TV shows, etc.), we all like to feel we are mavericks. In the individualist workplace, employees are happiest when they have some autonomy and responsibility. They want the tools, resources and support to do their job and then to be left alone to get it done.

In a collectivist workplace, employees tend to be happiest when there is harmony among the team members. No one really wants to stand out from the crowd and be recognized for individual achievement. But there is a strong sense of pride in group accomplishment. Employees are happiest when things are going smoothly and each person has a clearly defined role. They may see the support of their coworkers as one of the most critical resources they need to do their job well.

What About Panel Extenders in These Workplace Cultures?

In the individualist workplace, panel extenders might be used to show employees that their right to personal space and privacy are valued. Having the choice to interact or remain separate would be important. Workstations might be outfitted with panel extenders in different heights, configurations or even colors based on job duties, department, or other factors.

Will Panel Extenders Encourage This Trend?

We’re all for making workers more comfortable, but we certainly hope they don’t get quite this comfy…

by Online Clock.Learn about infographic design.
That being said, there is evidence that allowing your employees to take a 20 minute power nap could be good for business. NASA’s study on the topic found a bump in productivity of over 30% with judicious use of the siesta. We don’t know if you plan to institute a pro-napping policy at work. But, if you do, our sound suppressing panels might be helpful for keeping the noise of snoring down!