Workplace Aesthetics Part 5: How Would You Do on This Office Design Quiz? 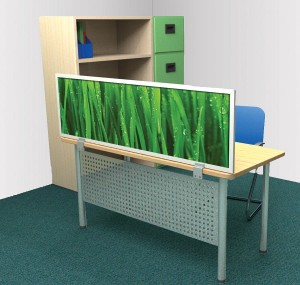 As a fitting finale for our April series on beautifying the office, ProProfs.com provides this timely office design quiz. Fortunately, we got almost every answer right on the first try—we’ve been studying hard! There were some very telling tidbits of information and a few surprises tucked away in this quick true/false test. Here are some facts the answer key revealed (based on results from a variety of different studies).

Employees Want a Room with a View

The issues caused by lack of privacy in open office plans are no surprise. We’ve already blogged about most of these studies here at OBEX. However, we did learn something new:

“People decorate windowless rooms with twice as many natural scenes and objects, compared to people inside rooms with windows.”

Do we have a solution that fills this need? Absolutely. At OBEX, we have the ability to print polycarbonate panels with any type of nature scene you can imagine. Employees might really enjoy:

You could turn your office environment into a walk-through gallery with nature scenes on panels gracing each workstation. This solution might be ideal for interior office spaces where most employees simply aren’t fortunate enough to have a seat by the window.

Workplace Aesthetics Part 4: It’s All in Your Head

This next post about workplace aesthetics is designed to blow your mind. The paper it references is very highbrow with lots of references to great minds like Nietzsche and Kierkegaard. The title is “Aesthetics, morality and power: Design as espoused freedom and implicit control” (George Cairns, 2009). Most of the paper is too dense for light reading, but there’s a section about “Aesthetic as ugliness – beauty as unaesthetic” that is really fascinating. It starts on page 10 of the PDF linked above if you want to read the whole thing. Here’s the short version.

It’s Time to Tear Down the Walls…

The author of the paper was working as a facility design consultant. He was hired by a government agency to redesign a work environment that featured “regimented rows of administrative staff desks, with supervisors sitting at the heads of the rows – supervision by watching every move. Departmental boundaries delineated and defined by ‘Berlin walls’ of storage cabinets – almost as impenetrable and, in the event, more permanent.”

Top management signed off on the consultant’s new plan to switch the layout to a single open-plan office for 350 people. Workers were given more equal space, the filing cabinets were moved, and supervisors were integrated into teams. Plants were added to make the space more aesthetically pleasing as well. All these changes happened over one weekend with no warning to the staff. Workers showed up on Monday morning and were directed by guides to their new workspace—where all their personal effects had been relocated.

How Did the Staff React?

They hated the changes. Employees claimed the new layout was too hot/cold, open/claustrophobic, quiet/noisy, etc. The consultant was mystified. A few years later, he returned for another visit. In the interim, workers had been permitted to make their own changes to the layout (within reason) to better suit their needs. They didn’t return to the original, regimented structure. Instead, they changed the orientation of some desks and added some screens to break up the space (and presumably offer some privacy). One group in particular had made only very minor changes to the consultant’s original redesign.

However, when the author interviewed the group members, it was revealed that they felt they had greatly improved on the consultant’s design. “…the particular group saw themselves as designers of their own workspace, having had to overcome the ineffectual input of an irrelevant external party.” In other words, it wasn’t the layout or the appearance of the space that really mattered. It was their perception of involvement in the design process. That’s something to bear in mind if you plan to make sweeping changes to your office space. Encouraging staff input at the start is likely to greatly increase their satisfaction with the outcome! 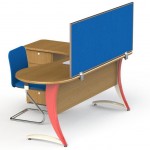 This Office Furniture USA “Insights” newsletter has some good tips for improving office aesthetics. First, they reveal some telling numbers that show why this is important. A study titled ‘Recruiting Qualified Employees‘, commissioned by the American society of interior design, found that:

Obviously, looks matter more than most employers think. It’s not enough to put fancy furniture and pretty pictures in the reception area. Job candidates and employees need to feel at home throughout the facility. Fortunately, it’s not necessary to tear everything out and start from scratch to improve the appearance of a typical office. OFUSA offers a few ideas for simple changes that can make a big difference:

Cubicle panel extenders and desktop panels could actually fill the bill quite nicely. They are easy to install and remove, making workstations adjustable to meet different working conditions for each employee. Plus, workers could even get together and vote on a favorite color from our catalogue of polycarbonate panels including red, blue, green, and yellow options. If you wanted to really let them feel special, let each worker pick their favorite color and embrace the look of a more vibrant office aesthetic with an array of bright hues. It would be hard not to feel cheerful in the face of so much diversity!

This week’s study about beautiful workspaces is even more interesting than last week’s. It was carried out by Elizabeth Siler as part of a dissertation to earn her Doctorate in Philosophy at the University of Massachusetts, Amherst. It’s a small study, but Ms. Siler delved very deeply into the insights of about 20 people working in a variety of older and newer buildings. Some of the facilities were lovely and some of them were ugly. Here are some key insights from her 100 page paper entitled “How Does Beauty Matter? An Exploration of Employee Perceptions of Office Aesthetics”.

Siler found that people’s responses tended to fit into one of four basic categories: “One group of participants loved their work and saw their offices as an avenue of self-expression, an extension of themselves. Another group experienced considerable emotional distress because their offices did not reflect the quality of their organizations’ work. For a third group, functionality was primary. For the last group, the office stood in for the organization as a whole– their feelings about their workspaces mirrored their feelings about their organization.”

Interestingly, while functionality was important and generally ranked higher for the newer buildings than the older ones, aesthetics could be just as bad in a new facility as in an old one. For example, a fully renovated office space that enforced total conformity with bland and utilitarian furnishings was often considered unaesthetic. Employees who had the desire and ability to decorate their own workspace expressed more satisfaction with the appearance of their work environment than those who did not.

That being said, ancient facilities did take some hard knocks for their appearance. Employees tended to feel bad about signs of neglect that made old buildings less attractive. They felt it showed their employers didn’t care about their hard work. Even worse, they said that a poorly maintained facility reflected badly on the quality of the work they did.

In fact, many respondents had difficulty separating their feelings about their work from the ambience of the workspace itself. That could be positive or negative, depending on the aesthetics of the building and furniture. For example, some respondents said they found their workplace depressing. Others found a beautiful workspace made them feel more organized, productive, and creative. The study had a small sample size, but you’d probably get similar responses if you interviewed employees at your own company.

Here at OBEX, we’ve talked a lot about how privacy and noise control affect employees at work. However, there’s another aspect of panel extenders that we haven’t talked about very much—the aesthetics. In April, we’re spending all month on the topic of how workplace aesthetics impact employees and how cubicle extenders and desktop privacy panels can enhance the workspace. First, let’s explore some of the research that’s been done on the topic.

It’s Not All about Ergonomics

A 2011 Swedish study published on PubMed has revealed something interesting regarding how employees feel about their workplace. Almost 2000 employees were surveyed at a broadcasting company and asked to provide feedback about both ergonomic and aesthetic concerns in their work environment. According to the results, workers notice more issues with how a workplace affects their senses than with how it supports their physical bodies. Aesthetic needs were mentioned more frequently than ergonomic needs—with no difference in reporting rates between men and women.

When Do Workers Care Most about Beauty?

What was interesting was the information the study gathered about the type of employees who ranked aesthetic improvements as very important. This list included workers who were:

Apparently, employees experiencing challenges at work or at home may be more susceptible to noticing how unattractive their work environment is—and have a strong desire to work in a more soothing or uplifting space. In conclusion, “The study results show a relation between work place aesthetics and health and well-being. Future work health promotion and prevention may benefit from the inclusion of an assessment of workplace aesthetics.”

Employers who want to improve productivity may wish to explore easy ways to create a more vibrant and appealing workspace. With the well-known impact of color on emotional well-being, installing blue or green panel extenders might be one way to help create a relaxing atmosphere for stressed employees. It’s an inexpensive way to give workstations a facelift.