Office Productivity for IT Workers Examined 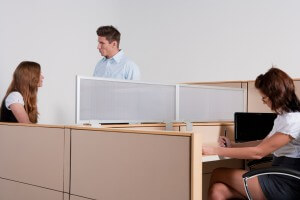 How is it possible that some IT workers are ten times more productive than others? Is it because they are more highly educated? Does higher performance correlate to more years of experience? Are top performers simply born smarter? Is a person’s ability to turn in great work linked to a generous salary? According to office productivity research from PdK Consulting, none of these factors are as critical as you might suppose. The day-to-day work environment has a huge impact on software developers’ ability to churn out error free, high quality code.

What Makes the Best So Much Better Than the Worst?

If you haven’t read about the famous “Coding war games”, this study measured the productivity of 600 programmers in over 90 different companies. Then, the participants in the top 25% were surveyed and their answers compared to those in the bottom 25% to detect any relevant variables. Having an acceptably quiet and private workspace were very significant factors, as was the ability to avoid taking phone calls or being interrupted by coworkers. In other words, being left alone to do the job they were hired to do was the ideal working situation. The same likely holds true outside the software development arena for other jobs that require dedicated focus.

The best and fastest programmers outworked the least productive by 10:1. However, even the average performers were more than twice as productive as those who were least productive. It isn’t difficult to imagine that even incremental improvements in noise control and privacy could have a substantial effect on helping knowledge workers be more efficient.

Are You Creating or Attracting Highly Productive Workers?

There are obvious limitations to this study given its subjective nature. For example, actual noise levels were not measured—participants simply reported whether they felt distracted by workplace noise. However, others studies that have objectively measured office noise confirm that certain types of sound (particularly human conversation) are highly disruptive and make it difficult for workers to concentrate.

In any event, the conclusion provided by the research team is worthy of contemplation: “The data presented above does not exactly prove that a better workplace will help people to perform better. It may only indicate that people who perform better tend to gravitate toward organizations that provide a better workplace. Does that really matter to you? In the long run, what difference does it make whether quiet, space, and privacy help your current people to do better work or help you to attract and keep better people?”

Office Introverts: Do Some of Your Employees Work Best Alone? 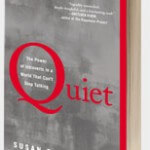 Susan Cain, a self-professed introvert, is not exactly the person you’d expect to see giving a TED talk. But her book “QUIET: The Power of Introverts in a World That Can’t Stop Talking” brought Cain into the public eye in unexpected ways. She gave a voice to everyone who has ever wished for more peace and quiet at work. While collaboration and socialization at the office can be wonderful, at least 30% of the population wishes for a workplace where these activities weren’t given so much importance.

Introverts Are Stymied in Their Efforts to Be Effective

Many of the greatest ideas arise and most workplace productivity occurs when people are given space and time to really concentrate. For introverts, being required to perform “on demand” in a group setting can lead to anxiety over excessive scrutiny or criticism. But given a few hours alone, they can come up with amazing solutions or work at lightning speed to get critical tasks done on time. It’s not that they hate their coworkers. Introverts simply want to be able to choose their interactions with care to avoid depleting themselves. When they are part of a culture that overemphasizes what Susan calls “The New Groupthink”, their work suffers.

What Type of Workspace Do Introverts Crave?

A private office at work would probably be a dream come true—and working remotely from a quiet location like a home office is another favorite option. The worst possible workspace is an open office plan with no walls and no privacy. That’s not surprising since even extroverts can feel overwhelmed and stressed when there is constant noise. Introverts would usually prefer to have a cubicle rather than the type of open desk with low or no dividers that is prevalent in today’s office environments.

Cain recognizes that the economics of the open office design make it too tempting for most companies to forego. But she believes there is a way to find some middle ground. Jim Hackett, recent Steelcase CEO and fellow introvert, agrees that it’s time to make a change. Cain is now collaborating with this leading office furniture company on solutions. “We’ve formed a partnership with Steelcase to create quiet oases of focus and respite for open plan offices, so that workers can move freely between social and private spaces.” Design ideas are due to be released sometime in 2014.

Do your employees really care about the latest “eco-friendly” initiative at work? Are they on board with the idea of a mission statement that includes caring for the planet? Would they like to have a say in sustainability in the office? Evidence suggests that the answer to all of these questions is “Yes!”

Rena M. Klein at the American Institute of Architects explores a 2008 SHRM study in her article about “Greening the Workplace”. In the study, a strong commitment to sustainable practices was linked to improved worker productivity and higher morale. Energy and resource conservation programs were popular practices, as was support for cycling and other fuel-efficient commuting methods. However, the #1 practice that garnered the most support was reuse of old furnishings.

“Employees were asked which environmentally responsible practices they thought were most important for organizations to carry out. They reported that donating/discounting used office furniture/supplies to employees or local charity was the top environmentally responsible practice.” It’s always nice when what’s good for the environment coincides with what’s good for workers and the local community.

Environmental Responsibility Is a Passion for Young Employees

Sustainability is likely to become even more popular over the next two decades as Gen Y workers will comprise most of the workforce by 2025. According to OXYGENZ (a research project led by Global WorkPlace Innovation), youth believe that the office should be designed with an eye toward eco-responsibility. “Sustainability is highly valued with 96% desiring an environmentally friendly workplace, but not at the expense of design.” Fortunately, the range of choices for office furniture that is well-designed and responsibly manufactured is growing.

Of course, this doesn’t mean buying green is inexpensive—at least for new furniture. Cost can be a significant barrier to implementing an environmentally responsible program. In the SHRM study mentioned above, eight out of ten employees recognized this as one of the reasons such practices weren’t given more weight in the workplace. There is one option that satisfies:

Purchasing refurbished office furniture is that solution since the refinishing process consumes comparatively few resources. Employers can get their hands on the best name-brand furnishings restored to like new condition at a fraction of the cost of new. Buying items made with pre and post-consumer recycled content (like our panel extenders) is another smart choice. Our products are especially sustainable because they help businesses extend the useful life of their existing desks and cubicles.

Do your employees ever feel like they are a captive audience? Do they think working in a cubicle is cruel and unusual punishment? Perhaps they would breathe easier if they had at least the illusion of wide open spaces. According to a study carried out by the American Association for Justice, the right kind of art installation on a wall can make even the most unpleasant work environment more bearable. A review of the study (Developing the Evidence for Evidence-Based Design: The Impact of Simulated Nature Views on Stress in a Correctional Setting) by the American Institute of Architects dug into the details.

Office Décor at the Big House

The setting for the photo mural is the intake area of a correctional facility. As one might imagine, this environment is full of stressed out individuals. Inmates are going through a major life change as they prepare for incarceration. Staff members are dealing with an unstable and potentially volatile populace. Both groups have good reason to be on edge. It might not seem like changing the scenery would help much. But the results of this study tell a different story.

The Heart of the Matter

Unlike similar studies that rely solely on subjective reporting, participants in this research project actually wore heart monitors to measure stress levels. According to analysis of these records, “after installation of the mural, intake officers’ heart rate was significantly lower at the beginning of the shift; the rate of increase of heart rate was significantly less from the beginning to end of shift; and there was a significant increase in “log power”, indicating inhibition of heart rate. The rate of log power increase is statistically significant and is consistent with lower heart rate and less stress. These data are suggestive of a pattern that is consistent with reduced stress at the end of the day after the exposure to the mural intervention.”

Do Try This at Your Own Office

To see what this particular mural looks like, click through and scroll to the bottom of the page here. It’s certainly a peaceful prairie scene. Given the inexpensive nature of photo mural installation, it might be something to try out in a traditional office space. Or, you could start smaller with custom printed privacy panels featuring simulated nature scenes.