How to Convert Your Open Office to Cubicles Using Panel Extenders

Earlier this year we wrote a post about the myth of open office productivity.

As we pointed out, there are several studies that show open offices tend to make employees more distracted and reduce overall productivity.

For our current and future clients, these findings bring up an important question: How do you transition an office from an open concept to cubicles?

The answer to this question may seem formidable but it’s a lot simpler than you think. Open offices utilize desks and those desks can be transitioned from open to private via several different types of extensions, all of which can be installed within minutes to avoid costly labor shutdowns.

If your current open office layout includes desks that have absolutely no separation between workspaces, then OBEX desk and table mount privacy panels are the most effective solution for reducing noise pollution and increasing privacy for your employees.

These privacy panels are integrated onto your existing desks with very little effort. Each panel comes with everything needed to install them. The panel clamps fit desk thicknesses between 0.75 inches and 2.75 inches.

Offices with high noise levels are a good fit for acoustical tiles, which come in 25 different styles. These panels are industry-rated to reduce more than 50% of the noise traveling into a workspace.

These panels hit all the key factors in the transition from an open office to a cubicle system: low cost, easy installation and effective sound reduction.

This photo shows you an acoustical tile privacy panel installation: 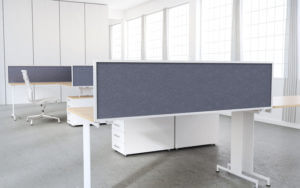 These types of panels are a great choice if you have a lot of desks in a room and want to provide private work spaces that also serve as modesty screens.

The big advantage over desk and table mount panels is that these panels extend below the desk surface.

Like the desk/table privacy panels, you have multiple options for colors and material, including noise-reducing acoustical panels. 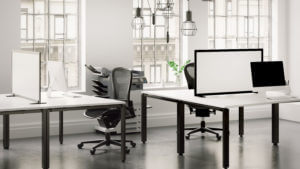 Another perk to this option is that they’ll come in handy if you have a long-term plan for office reorganization, but want an immediate change from open to cubicles.

These panels meet that short-term need and, when it comes time to reorganize your desks and sections, you simply lift the panels off the old desk and place them on the new ones.

Making a move from an open-office layout to cubicles doesn’t have to be the fiasco you’re probably envisioning.

Our panel extenders are meant to be an elegant and simple solution to increasing privacy in an office where there’s really no time to shut down operations for rerouting cables, moving desks and installing dozens of heavy, clunky cubicles.

As we mentioned earlier, our panel extenders can be installed in a matter of minutes without disrupting your productivity. Think about it like this: We can install one noise-reducing panel extender in the amount of time it takes for an employee to go to the break room and brew a pot of coffee.

Consider this, too: Our panels come with a 10-year non-transferrable warranty that covers defects in materials and craftsmanship when incurred during normal use.

Our website has an extensive gallery of various types of panel installations that we think will help you visualize how our panels would look in your office.

Our gallery is a good way to view the various style and function combinations we have, too, as our frames and panels employ multiple materials.

For as long as workplace satire has existed on television and in the movies, cubicles have gotten a bad name.

What once was a visionary idea from leading workspace designers Herman Miller has now become synonymous with the drudgery of daily office life. Ask any young professional to come up with synonyms for “cubicle” and you’ll probably get a litany of negative equivalents.

But here’s the deal – more and more research is showing that the happiest employees are the ones who work in cubicles.

Yes, we know such a sentiment goes against the commonly held beliefs of the collaborative powers of an open office. If Google, Facebook and just about every other tech startup use open-office floorplans, how, in the name of workplace collaboration, could cubicles be the right way to do things?

We think research shows that cubicles have three specific advantages over an open-office floorplan, all of which we’ll cover in this post.

Cubicle Advantage #1: Your Space is Your Space; Not the Company’s

Let’s think about the open-office philosophy for a moment. Companies have shunned cubicles in favor of an open floor plan because it promotes collaboration and transparency. You’re removed from a private space and placed in a communal atmosphere. 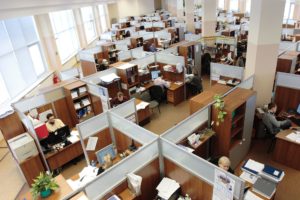 In theory, this sounds like an excellent idea. But, consider this. When you opt for an open office, you’re sacrificing your privacy for the good of the group. Without getting too philosophical, think about how this affects your self-expression and privacy. You lose it, right?

You no longer have a space you can call yours, a space that’s shielded from coworkers and bosses. You’ve given that up for the sake of the company’s identity and culture. We’re all for company culture – it’s a hallmark of the new workplace revolution.

However, we think employees lose out when company culture requires them to surrender their personal space for an open floorplan.

While it might sound appealing to tackle your checklist while sitting in an overstuffed bean-bag chair, the fact that another employee is doing the same thing just inches away on a picnic table does something to your mind.

You see, our minds can be more productive when they sense they’re in a private space. According to a 2014 article from the New York Times, researchers found architectural privacy has a direct effect on psychological privacy, which in turn increases workplace and occupational satisfaction.

Think of it in terms of working at home. If you set up your laptop in your living room, you’ll be at the mercy of distractions and sound pollution that will stymie your creativity. Kids playing with your mouse. TVs blaring. Babies crying.

But if you can steal away to an office space for an hour, you have the quietness and anonymity you need to generate ideas and focus.

In fact, a 2017 BBC article notes that we’re 15% less productive in open-office environments and the small distractions that are more frequent in these environments cost us up to 20 minutes per distraction.

There’s also this sterling conclusion from a New Yorker article:

A 2016 article from Forbes points out that one landmark study showed that workers’ biggest complaint about open offices is noise, as more than 1 out of 4 respondents said they were unsatisfied with noise levels in their workplace.

Cubicles shield out much of the noise from coworkers and restrict the sound levels of your conversations, whether they’re sales calls or confidential conversations.

They also shield you from the stress that comes from having to focus on your work while the noise of your coworkers’ tasks spills into your desk area.

Our line of simple desk dividers and panels can reduce noise pollution, increase privacy and boost productivity. Stop by our Products page to get a sense of what we can offer, then give us a call at 888-323-6986.