We literally want you to sit back and relax as you read this post.

Hopefully, you’re sitting in the kind of office chair that allows you to do that. If not, then you’re going to like the suggestions we’ve gathered for you.

You see, office chairs have a rich history in the United States and abroad. Some say the ancient Egyptians invented it, while others point to the 19th century. Either way, I think we can all agree that your chair is what dictates your level of comfortability.

We’ve all sat in one of those rickety old “chairs” that can tie our back muscles into nasty little knots. And hopefully we’ve all felt the relief when we finally sit in a solid, well-constructed chair that supports our alignment and keeps us happy for eight hours (or more) a day.

Which chair is right for you? Only you can decide that, but we’ve put together a few suggestions we think you’ll enjoy.

Herman Miller Aeron:  The King of the Workplace Castle 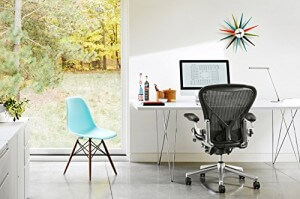 There’s a reason why this chair is so expensive: It’s arguably the best office chair on the market… ever. The Aeron was originally designed by two ergonomic geniuses, Don Chadwick and Bill Stumpf. Herman Miller loved the chair and it soon became a favorite among discerning customers.

Gear Patrol calls the Aeron “the chair against which all chairs are measured.”

Aeron is everything an office chair should be: stylish, unique and an absolute champion of good posture. Take a moment to watch this promotional video. You’ll get a pretty good idea of the mechanics and design behind this treasure:

Sitting in this beauty of a throne all day doesn’t seem so bad, does it? If your bottom line can bear it, you might want to invest in the Aeron. The chair, according to Omincore, comes in three different sizes: A, B and C.

Sayl Away with Me: The Herman Miller Sayl

If you can’t pony up nearly $1,000 for the Aeron, consider the ever-modern Sayl. This chair, according to Herman Miller, contains the most complex part the company has ever created.

“Most chairs tend to be overwhelming,” designer Yves Behar said in the video below. “Everything was done for (the Sayl) to be really simple.”

You know the chair is going to be good when the designer says the back support is the most complex part ever created in the 80-year history of the company. 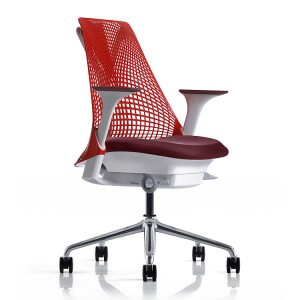 The chair can be had on Amazon for about $510, around half the cost of its more famous big brother, the Aeron. Plus, the Sayl has a 97.22% customer satisfaction rating on Smart Furniture’s Top-10 office chair list.

“The Sayl earns its reputation as one of the most beautiful office chairs in Herman Miller’s stable,” Smart Furniture wrote.

Word to the wise: This chair is better used as a conference-room piece. Task chair it is not, Smart Furniture says.

This suggestion comes from the reviewers at Gear Patrol. The Air Grid is workmanlike in its design. It’s not flashy and it’s not fancy. It’s a simple, efficient piece of furniture.

But don’t take Gear Patrol’s word for it, or even ours. Head to the chair’s Amazon page, where 952 people have given the Air Grid 4.7 out of 5 stars. 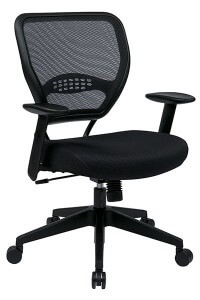 Like the Sayl, this chair has a breathable back that provides enough support to keep you feeling cool and strong as you slave away at your keyboard. Here’s a video of the product:

While the Air Grid doesn’t give you that same legendary feeling that you’ll get from the Herman Millers we mentioned above, it does its job well. And for $144, it’s a steal for the level of quality it offers.

To find out more, head to the chair’s Office Star product page.

In the overall masterpiece that is your office’s layout and organization, chairs are just one part of an intricate orchestra of furniture elements.

Stop by our website and take a look at our gallery, where you can see photos of our products at work in an office space.

Four Monitors That Can Bring New Life to Your Workday

Making Life Easy: Three Project Management/Productivity Apps You Need to Try for the Sake of Your Team