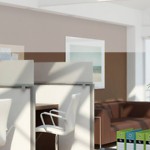 The original plan for the cubicle was much different than how it is often implemented today. Robert Propst, the man credited with creating the cubicle, developed his unique Action Office concept in the 1960s. It was a much different model than the modern cubicle floor, with varying cubicle height, extenders if needed, and a departure from the 90 degree grid.

By 1988, he was disillusioned with how his idea was being applied, saying he had hoped that the the concept  “would give knowledge workers a more flexible, fluid environment than the rat-maze box of offices,” and bemoaning the fact that “not all organizations are intelligent and progressive.”

Propsts’ original vision was that cubicles would themselves be fluid, and only part of an office layout plan. Instead, many companies crammed as many identical cubicles as possible into their square footage, and the era of the cube rat began. Where in the past, 80 to 90 percent of an organization’s budget was spent on individual workspaces, the numbers fell abruptly to 65 to 70 percent and today are in the process of scaling down to 50 percent.

The need for exclusive workspace is a given, but an even greater need is a space where workers feel at ease – the design should be good enough that the “anywhere but here” attitude fades away and the office seems just as good a solution as telecommuting from home or a coffee shop. There’s no one size fits all in any other facet of life, why should a workspace be so different?

Thankfully, things like cubicle height extenders, privacy panels, and a designer with a sense of flowable space can help create an office where everyone has as much space as they need, acoustics are dampened enough to allow distraction free working, and each person feels like they have a modicum of privacy without being boxed in.

Using a free flowing mindset and taking into account not only the personalities of every type of worker but also the type of work they do and whether or not they will be expected to collaborate or work alone can help create a cubicle setting that is friendly and comfortable. Cubicle height extenders are a good starting point, but that’s only the beginning!