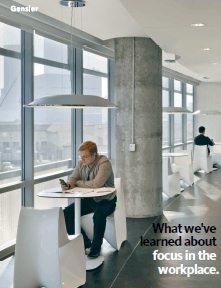 This year, Gensler released findings based on half a decade of data collected from 90,000 employees using its Workplace Performance Index™ tool. A whitepaper based on these survey results came to the following conclusion:

“The WPI’s unexpected revelation is that the most significant factor in workplace effectiveness is not collaboration, it’s individual focus work. And we also found that focus is the workplace environment’s least effectively supported activity.”

The authors of the whitepaper blame the usual suspects for the dip in concentration: open office design, too much noise and lack of visual privacy. These findings may come as a surprise to Gensler, but at OBEX we already knew this. It’s the reason employers buy our cubicle extenders – and the reason we added the desk-mounted privacy panels to our product line this year.

Why You Should Focus on Focus

What we did find noteworthy is the fact that Gensler found the four “modes of work” (focus, collaboration, learning and socialization) are more interdependent than previously supposed. But they aren’t equally important. In fact, focus is the core value upon which all the other work modes depend. According to the whitepaper, “Workplace strategies that sacrifice individual focus in pursuit of collaboration will result in decreased effectiveness for both.”

They also point out that the office space doesn’t have to be extra-specially designed to promote collaboration. If people want to team up, they’ll be flexible and find a way to do it. “The most critical factor in collaboration is who you’re collaborating with, not where. Space plays a role, but a secondary one.” In contrast, the Gensler research shows that space must be carefully and deliberately designed to foster high levels of intense concentration.

Participants surveyed consistently said they spend most of their time (55%) doing focus work and that it was by far the most critical aspect of their job (88%). Obviously, employees want to do their jobs well and employers could see huge performance gains by making that possible. It’s time the workplace was redesigned to support what’s best for business and for people.

Does New Technology Increase the Need for Workplace Privacy?