Is Death by Cubicle Really a Thing? 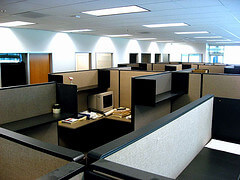 About 40 million working North Americans work in cubicles. Some like it, some don’t – and the correlation between those who feel positive about their workplace and those who don’t is directly related to how their workplace is managed, more than it is the mere fact of being a cubicle worker.

The modern-day cubicle has been formally denounced by the man who actually came up with the idea – Robert Propst. Cubicles were put forth by Propst in 1968 as a way to increase office productivity by providing personal work-spaces with plenty of shelving and increased work-surface areas. He hoped that this would help out office drones who were having difficulty with more open work-spaces that gave little storage or utility space and were so open distractions were common.

With cubicles, he felt, employees would have more room to work; partitions could be used to pin up projects and to provide the privacy that the earlier open offices lacked. Surprise – the original plan also called for adjustable desk levels, similar to today’s “newfangled fad”, with the idea that workers could benefit from the chance to spend some time standing up.

Overall, cubicles were supposed to be beneficial to the worker. After all, health can be largely dependent on your environmental comfort, which is determined by whether your immediate space meets basic physical, functional and psychological needs. A well appointed cubicle with panel extenders of appropriate height would give each employee space and privacy to work, without completely cutting them off form their fellows.

Sadly, economics completely screwed up Propst’s dream. Office space costs climbed, and instead of being focused on worker benefits, cubicles were used to maximize real estate. They became tiny and cramped, and designed to cram a lot of people into a limited area. Instead of being the flexible units that Propst intended them to be, cubicles became rows of cages, and the term “death by cubicle” emerged. TV shows, comic strips and movies made sharp commentary about cubicle life, pointing out that people were being trapped in boxes while being encouraged to think outside them.  Productivity fell, as did worker health, satisfaction, and stability.

But death by cubicle doesn’t have to be a thing. Cubicle panel extenders and a larger footprint can make cubicles worker friendly again!