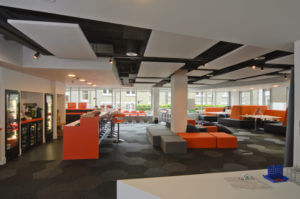 ake a minute to imagine the ideal office, the one you’d love to work in but just can’t.

What comes to mind? Google? Facebook? Any number of California-based tech giants and startups? And, most likely, those offices that you thought of are huge, open spaces where collaboration seems to be the prevailing theory of workspace design. Couches. Bean bags. Standing desks. Big tables.

The open-office theory of workplace interaction now has a pretty solid grip on the work world and is the undisputed spearhead of modern work innovation. However, people have started to question how effective an open office really is.

If those arguments could be summed up with one question, it would be: Are open offices really as collaborative and idea friendly as we think.

And, believe it or not, more and more experts are saying, “no.”

One of the things that’s rarely talked about in open-office discussions is the negative effect of the “all-ideas-are-welcome” philosophy.

You see, when high achievers are forced to work in an environment where their excellence is watered down by communal mediocrity, they leave. At least that’s the opinion of a recent Inc. article about why collaborative environments cramp superstars’ personalities.

“The problem is that rather than seeing a top performer as a role model,” contributing editor Geoffrey James wrote, “mediocre employees tend to see them as threats, either to their own position in the company or to their own feelings of self-worth.”

At the same time, these high achievers see collaborative environments as a burden they must carry. Burdens slow people down, and a slow pace, at least to high achievers, is seen as an acceptance of mediocrity.

“The No. 1 reason high performers leave organizations in which they are otherwise happy is because of the tolerance of mediocrity,” Inc.’s Les McKeown wrote in an article picked up by TIME Magazine. “When You’re a Ferrari (or think you are), you don’t want to spend your time idling at the curb.”

A big emphasis of the open-office movement is that Millennials don’t want to take well to overbearing leaders and value community. Consequently, an open-office environment puts everyone on the same plane since managers and employees are working side by side.

However, research indicates that the mind is wired for privacy. In other words, your brain needs to feel a certain level of autonomy and privacy to focus enough to excel.

The evidence for this is a 1980 study published in The Academy of Management Journal, which noted that employees were more satisfied with their job when the office’s architecture allowed them privacy.

While the study is three decades old, it remains relevant if only because other studies were done in the past few years that have confirmed it.

In fact, a New Yorker article that summarized the research in this area resolutely concluded that open offices were not nearly as beneficial as most of us believe they are.

Another landmark study came from research firm Steelcase, who revealed that all was not well in the world of open-office workplaces even though the concept has its advantages.

“Throughout the world, too much interaction and not enough privacy has reached crisis proportions, taking a heavy toll on workers’ creativity, productivity, engagement and wellbeing,” Steelcase concluded. “Without question, successful collaboration requires giving coworkers easy access to each other. But it also requires giving each individual the time and places to focus and recharge, and too many workplaces today aren’t delivering on privacy as a necessity.”

If you’ve been considering transitioning away from a full-fledged open office to something a little more private, contact us.

We’ll help you determine what you need to do to make your changes with the least amount of impact on your employees’ performance.

Cubicle Shields vs. Divider Panels: Is One Better Than the Other?