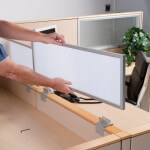 The benefits of improving employee creativity often speak for themselves. However, you are constantly on the look out to see what else can be done to keep the momentum going. One way is by purchasing office panel extenders to fit on top of your existing cubicles, so distractions can be better controlled when employees really need to focus. Although they are still sharing the same office, when each worker feels as if they have their own personal space, this can provide a sense of motivation and keep them doing their best work. Let’s see the ways these extenders can give them that added creative spark. Studies show:

A study published in the Journal of Applied Psychology says that office distractions will make employees stressed and feel as if they are not working at their best. Add to this, a feeling of powerlessness in not having any personal space and, the fear of catching a cold or getting the flu; this can prevent them from being creative and is not a good way in bringing out their best. Providing your workers with office panel extenders for their cubicles is the best solution in giving them a sense of privacy and, help them stay productive and imaginative. To talk about this, please contact us today for more information. 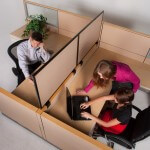 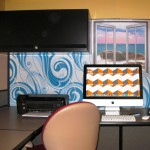 It’s time for the Friday Pick Me Up post – this year, we are starting out 2014 with a series of cool ideas for panel extenders, to make your workplace not only more efficient but more fun!

If your office is allowing flexibility in cubicle height and width, you may have a little more space to play around with your walls! Maybe an office contest is in order, to see who can be the most creative. Here’s one idea:

Create an underwater mural on your cubicle extender wall, with fish swimming lazily between corals and anemones. This works even better if you can create a background that enhances the deep sea vibe. Hang a pair of flippers or a snorkel rakishly from one corner of the cubicle wall and insist anyone speaking to you address you as Captain and sir. Reply “Aye aye” to any superiors who wander by and mutter to yourself about keelhauling whoever switched the coffee for decaf. At the very least you’ll be a shoo in for any prizes handed out on talk like a pirate day!

A bit too much? Well, you could simply hang cat pictures on your cubicle extender wall and call it a day… Seriously, what do you do about your own cubicle decor when you have higher walls to cover?

Are You Impressed By the CEO Cubicle Trend?

Did you see the recent Motley Fool article about Red Hat CEO, Jim Whitehurst? Much is being made of the fact that this leader toils in a cubicle alongside his employees. The author of the piece states that “It’s clear that lavish excess isn’t written in the cards for this down-to-earth corporate leader.” Just a few sentences earlier in the same paragraph, Whitehurst’s $7.4 million dollar 2011 compensation is mentioned without a trace of irony.

We’re guessing that going home to relax in a heated, Olympic sized swimming pool in the 5 acre backyard of your mansion helps take the edge off at the end of a hard work day.* For the average cubicle worker, the surroundings at their office are a little more than window dressing to create the appearance of equality. People who don’t get a choice to forego a corner office may appreciate the perks of privacy a little more. We think everyone deserves to have a little space to call their own at work. That’s why we make cubicle panel extenders affordable enough for the whole office – not just the CEO in the cubicle next door.

*This description of the Whitehurst residence is purely speculative – just like most of the investment advice on the Motley Fool site.