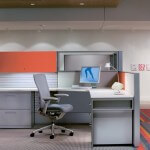 Is your cubicle chair broken down and squeaky? Does it refuse to roll the way it once did? Does the back give way, suddenly, leaving you hurtling backwards to land on your back like a scene from Nine to Five? Or is it just uncomfortable?

Studies show that workers are happier when they have a good office chair to sit in. As a manager, requisitioning decent office chairs should be something you address regularly, to ensure that everyone can function at maximum productivity levels.
By standardizing chairs with a model that has a lot of adaptive function, you can bring joy to every cubicle. You can also use cubicle extenders to help customize each workspace without losing overall uniformity.

If you can find the balance between buying a custom office chair for everyone and half of your staff being miserable, you’ve done a good job! Listen to your cubicle workers and find a compromise that works for the majority.

In Memory of a True Office Furniture Artist 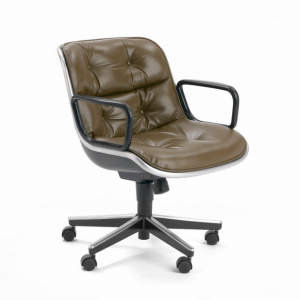 Charles Pollock was more than an industrial designer. He was an office furniture artist. A contemporary of Charles Eames, George Nelson and Florence Knoll, Pollock was fortunate to actually collaborate with each of these famous designers during his career. His most famous chair isn’t known by some cute marketing name. It is simply called the “Pollock”. He describes the inspiration to create a design based on a single line this way, “Everything has an edge and everything is a line…I experimented with wire and curved the edge…I developed the idea of ‘rim technology’ and hit on the design.” After much refinement with the guidance and encouragement of Florence Knoll, the chair came into being and quickly caught on as a favorite for swanky executive offices.

The iconic rim is more than an aesthetic detail. It’s actually the piece that holds the whole chair together. Besides offering structural support, the rim is protective. “It doesn’t rust, it doesn’t tarnish, it doesn’t fade. It keeps its visual appearance almost forever. In other words you have a visually pleasing color or texture or chrome finish articulated in a fashion that goes around the edge of the chair, which is beautiful and acts as a guard against destructing the chair no matter where you hit it….up, down, front, side, back, whatever.” This chrome and leather dream has been featured on hit TV shows like Mad Men, occupied collections in several major museums (including the Smithsonian), and is still available from Knoll.

What Happened to Pollock? 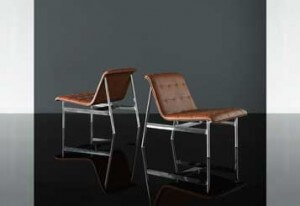 It would be incorrect to think of Pollock as a one-hit wonder. He actually worked hard throughout his career. Sadly, he did not regain commercial success for many decades. After a long hiatus from the public eye, Pollock was commissioned recently by Jerry Helling, president of Bernhardt Design to create another great seating option. The CP Lounge chair shows how Pollock’s great taste and sense of the classic hasn’t changed since the 1960s. Pollock passed away in a fire this month at the age of 83. His designs will continue to bring his memory to mind for many decades to come.